Smallest Dog Breeds in The World

Good Dogs Co Updated: December 25, 2020 0 57
This article may contain affiliate links. When you purchase through links on our site, we may earn an affiliate commission.

Due to a lot of interbreeding and cross-breeding done by humans to dogs, a lot of new dog species were introduced. Some of them have been able to achieve improvements in their physical attributes while others underwent changes in their behavior.

Although size does vary with whoever is considering it, there is a general standard on which types of dog breeds are considered as small. That said, here are some of the smallest dog breeds you can find out there:


This breed which is of German origin is also referred to as Monkey Dog. It’s basically a crossbreed of the Brussels Griffon and Miniature Schnauzer, weighing a maximum of 7-10 pounds and standing at only 9-11.5 inches.

They have an estimated lifespan of around twelve years. This breed’s character includes friendliness, affection, curiosity, and alertness. Aside from that, they’re also known to be very loyal and always on the lookout to protect whoever they consider as family from danger, even with their very small size.

They are quite adaptable to many situations and environments but are also prone to diseases and infections. Therefore, they require proper care and feeding and should be taken to animal clinics for regular checkups.


From its name, the Maltese are believed to have originated from Malta. The breed has been known by many different names, ranging from “ancient dog of Malta” to Melita. It is also believed to be one of the oldest dog breeds in the world.

They have an average maximum weight of 7 pounds and stands at 7-9 inches. They have a long and silky coat and don’t suffer from allergic effects because they do not shed. They are very playful and love being around humans.

The Maltese breed requires regular cleaning and also professional grooming. They are mostly affected by teeth cavities, hence proper teeth brushing and the use of recommended toothpaste are necessary.


Although its origin is never well-known, this breed is greatly associated with Japanese royalty. With a maximum height of 8-11 inches and an average weight of 7-11 pounds, the Japanese Chin has an attractive shade and match of color, with a distinct feature of a dot or a line on the forehead presumed to be the mark of Buddha.

This breed portrays characteristics similar to those of a cat, ranging from their intelligence to cleanliness. They are a defensive breed and adapt well to new environments. They are also a great form of entertainment.

They require regular brushing and combing, and their diet is a very major factor in their maintenance.


Pugs are known for being social and are considered as one of the best companion dogs. Their distinctive physical features which include a wrinkly and short-muzzled face make them loveable. They also have a curling tail over the hips.

They can grow up to a height of 10-13 inches and a weight of up to 14-18 pounds. They are strong but not aggressive, not to mention they are very loving and playful. They can be very sensitive and always act according to their owner’s moods. 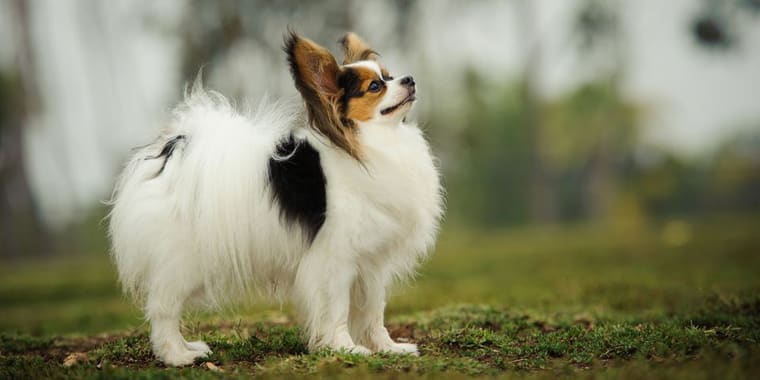 With the name translating to butterfly in English, the Papillon is a Spaniel-type breed and is also one of the oldest. They have a distinctive feature of a butterfly-like look with long hair that has fringes on the ears. They are very smart, very social, loving and playful, and are always very calm when in the hands of their owner.

On average, they can weigh around 5-10 pounds and grow to a height of up to 8-11 inches. They have a life expectancy of around 17 years. Daily walks and a lot of play are recommended to help keep them in shape.


This is a crossbreed between toy bulldogs and ratters. They rarely bark and have a quick adaptation to changes in the environment. They also require minimum exercise and can be quite territorial when it comes to cats and other animals.

An average French bulldog weighs under 28 pounds and can grow up to a height of around 11-13 inches. They like being close to human beings and might experience separation anxiety if left alone for too long. They are very prone to many common dog diseases and infections, so ensuring that they are in a clean and conducive environment is vital for their health.


This breed looks more like a teddy bear due to its small curly locks. They are smaller than normal poodles and are also considered very intelligent. This means that they require mental exercise most of the time. They are very playful, adorable, and are also sociable to other animals and humans, though it might take some time.

They grow up to 10 inches in height and an average weight of 4-6 pounds. They eat less, require less training, and are prone to genetic diseases that affect most poodles.


The Pomeranian is a descendant of the Spitz-type dogs. They are classified as toy dogs because of their small size. They are friendly and playful but can sometimes be aggressive just to prove themselves. They are very quick to changes in the environment and tend to bark whenever they feel the need to be defensive.

On average, a Pom can reach up to 6-7 inches and weigh up to 3-7 pounds. They can live up to 16 years and experience very few health problems if well-fed and given regular exercise.


Although very small, they are also very mischievous and loving, and if left alone for a long time, they tend to be destructive. They are also a perfect match for people with allergies because they do not shed. They are very playful and are considered to be one of the best family pets. They are adaptive to changes, just as long as they do not spend too much time alone.

On average, a Bichon Frise can reach a maximum height of 9.5-11.5 inches and an average maximum weight of 12-18 pounds, mostly for the males. They are prone to suffer from skin diseases, mostly during the summer, due to the hot air. Additionally, they can suffer from allergies, ear infections, heart disease, and diabetes.


The Chihuahua is the smallest breed of dogs that are believed to originate from Mexico. They are not as social and are, therefore, not suitable for children. They are also very easily provoked to attack. Due to their small size, they only require very minimum grooming and exercise. Most of the time, they tend to be very aggressive to bigger dogs, thus making them prone to injuries from other dogs.

On average, a Chihuahua can grow up to 5-8 inches and reach an average maximum weight of 6 pounds.

Conclusion
Due to their small size, most small dog breeds are also considered to be among the cutest. If you want to know more about other cute dog breeds, you might want to check out this article about cutest dog breeds.

We are a team of dog owners who are passionate about our four-legged friends. Our goal is to provide other dog owners with enough knowledge to ensure that their dogs are healthy and happy.

15 of the Cutest Dog Breeds

Top Ugliest Dogs: But We Still Love Them